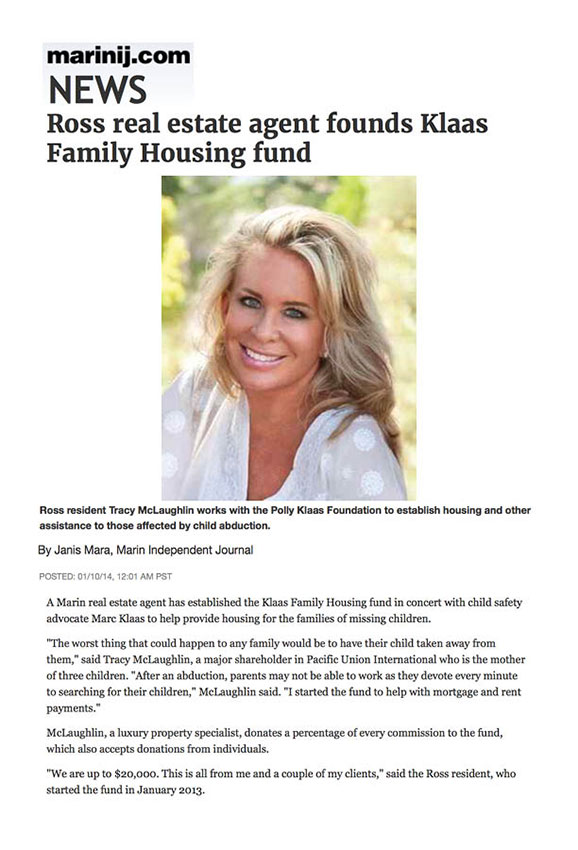 A Marin real estate agent has established the Klaas Family Housing fund in concert with child safety advocate Marc Klaas to help provide housing for the families of missing children.

"The worst thing that could happen to any family would be to have their child taken away from them," said Tracy McLaughlin, a major shareholder in Pacific Union International who is the mother of three children. "After an abduction, parents may not be able to work as they devote every minute to searching for their children," McLaughlin said. "I started the fund to help with mortgage and rent payments."

McLaughlin, a luxury property specialist, donates a percentage of every commission to the fund, which also accepts donations from individuals.

The first beneficiary of the fund was Michelle Knight, one of three Cleveland, Ohio women held captive for more than a decade. Knight, who vanished in 2002 at the age of 20, was rescued in May 2013 from the Cleveland house where she was imprisoned, raped and abused.

"The first chunk of our money went to Michelle to pay her rent," said McLaughlin, who sent Knight a check for $6,000 in July. Knight, estranged from her mother, had nowhere to go after she was rescued.

"I have a beautiful hand-printed note from Michelle," McLaughlin said. "She said she was honored and 'eternally grateful' for the grant. She said the money 'made it possible for me to stay at a home where I feel safe, secure and cared for.'

"I put that note on my bulletin board in the kitchen. I look at it every morning," McLaughlin said.

McLaughlin, a lifelong Ross resident, has three surviving children, Ross, 20, who is in business school in Colorado; Whitney, 15, a student at Marin Catholic High School; and Grace, 14, a student at Ross Elementary School.

"I was thinking about starting a charity for a long time (before the fund)," McLaughlin said. "I've been successful in my career and I wanted to do something to give back."

Seeing a television program on missing children led her to call Klaas, who she knew through his wife Violet, the manager of Pacific Union's Kentfield office.

"I said, 'If these children are abducted, who helps the parents financially? I imagine they are immobilized,' and he said, 'There is nothing to help them.'"

"I thought it was a great idea," said Klaas, who in the aftermath of the 1993 kidnap and murder of his 12-year-old daughter Polly gave up a high-powered career to pursue an aggressive child safety agenda.

Klaas worked with McLaughlin to establish the fund. Donations to Klaas Family Housing are tax-deductible because it is a program of the Sausalito-based KlaasKids Foundation, which is a 501(c)(3) nonprofit organization. The foundation was established in 1994 to create a legacy in the name of Polly Klaas. Its mission is to stop crimes against children.

Referring to the housing fund, "We still have plenty of money in the fund and we are actively looking for another recipient, someone we can help. We were very, very happy to help her (Knight)," Klaas said.

"When I saw the note she wrote, it had one of the most unbelievable lines I've ever heard, considering the context. When I read that line, it brought me to tears," Klaas said.

He was referring to the conclusion of Knight's hand-printed note, which read, "Thank you for helping me to start my new life with peace. Just when the caterpillar thought the world was over, she became a butterfly. Life is tough, but I'm tougher."