Not everyone touring the expensive homes is a bona fide buyer 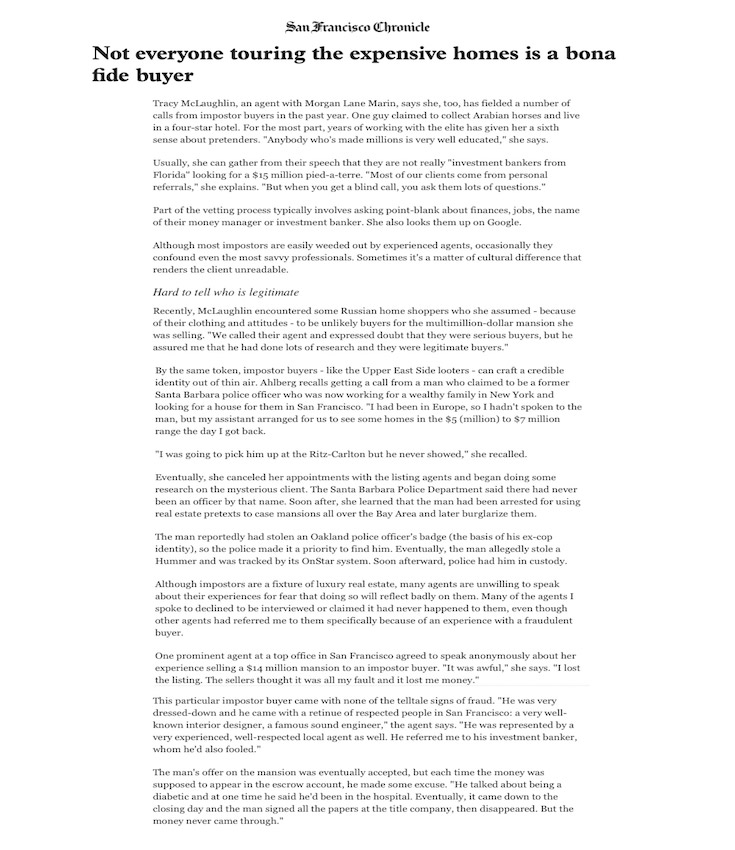 They seemed like just the sort that most high-end agents would thrill to see crossing the threshold of their open homes. Arriving in a Jaguar and dressed to the nines, the two fashionable women in their 30s enthusiastically posed all the questions that serious buyers are wont to pose.

But their interest had nothing to do with the real estate available for sale. Instead, the sophisticates reportedly had set their sights on the personal property available for looting: wedding rings, designer luggage, expensive Champagne.

When Jessica Joyner and Jennifer Jones were finally arrested in New York last month, the women had allegedly accumulated an impressive haul from their tours of luxury Manhattan homes: $70,000 worth of valuables including a Tiffany clock, diamond jewelry, Veuve Clicquot Champagne, Louis Vuitton luggage and a Bang & Olufsen telephone.

Impostor buyers are nothing new. As long as real estate agents have been allowing members of the public to enter private homes, disturbed individuals have taken advantage of this access to steal goods, case joints for future heists and otherwise invade the privacy of the sellers. But according to some Bay Area real estate agents, the shifting market is bringing out more wacko buyers.

Even as the softer market is compelling more real estate agents to make high-end properties open to the public, many are also stepping up their security measures: asking visitors to sign in at a computer, or requiring that touring agents provide a card at a broker's tour.

"In my experience of 28 years, it doesn't happen often," says Hill & Co.'s Stephanie Ahlberg. "But real estate goes in cycles. And when the market is uncertain, it seems like all the fruits and nuts come out."

She says that in the past few months she's encountered an abundance of bizarre buyers - including those who pretend to be able to afford what they cannot and those who make "ridiculously low offers" on listings.

Tracy McLaughlin, an agent with Morgan Lane Marin, says she, too, has fielded a number of calls from impostor buyers in the past year. One guy claimed to collect Arabian horses and live in a four-star hotel. For the most part, years of working with the elite has given her a sixth sense about pretenders. "Anybody who's made millions is very well educated," she says.

Usually, she can gather from their speech that they are not really "investment bankers from Florida" looking for a $15 million pied-a-terre. "Most of our clients come from personal referrals," she explains. "But when you get a blind call, you ask them lots of questions."

Part of the vetting process typically involves asking point-blank about finances, jobs, the name of their money manager or investment banker. She also looks them up on Google.

Although most impostors are easily weeded out by experienced agents, occasionally they confound even the most savvy professionals. Sometimes it's a matter of cultural difference that renders the client unreadable.

Hard to tell who is legitimate

Recently, McLaughlin encountered some Russian home shoppers who she assumed - because of their clothing and attitudes - to be unlikely buyers for the multimillion-dollar mansion she was selling. "We called their agent and expressed doubt that they were serious buyers, but he assured me that he had done lots of research and they were legitimate buyers."

By the same token, impostor buyers - like the Upper East Side looters - can craft a credible identity out of thin air. Ahlberg recalls getting a call from a man who claimed to be a former Santa Barbara police officer who was now working for a wealthy family in New York and looking for a house for them in San Francisco. "I had been in Europe, so I hadn't spoken to the man, but my assistant arranged for us to see some homes in the $5 (million) to $7 million range the day I got back.

"I was going to pick him up at the Ritz-Carlton but he never showed," she recalled.

Eventually, she canceled her appointments with the listing agents and began doing some research on the mysterious client. The Santa Barbara Police Department said there had never been an officer by that name. Soon after, she learned that the man had been arrested for using real estate pretexts to case mansions all over the Bay Area and later burglarize them.

The man reportedly had stolen an Oakland police officer's badge (the basis of his ex-cop identity), so the police made it a priority to find him. Eventually, the man allegedly stole a Hummer and was tracked by its OnStar system. Soon afterward, police had him in custody.

Although impostors are a fixture of luxury real estate, many agents are unwilling to speak about their experiences for fear that doing so will reflect badly on them. Many of the agents I spoke to declined to be interviewed or claimed it had never happened to them, even though other agents had referred me to them specifically because of an experience with a fraudulent buyer.

One prominent agent at a top office in San Francisco agreed to speak anonymously about her experience selling a $14 million mansion to an impostor buyer. "It was awful," she says. "I lost the listing. The sellers thought it was all my fault and it lost me money."

This particular impostor buyer came with none of the telltale signs of fraud. "He was very dressed-down and he came with a retinue of respected people in San Francisco: a very well-known interior designer, a famous sound engineer," the agent says. "He was represented by a very experienced, well-respected local agent as well. He referred me to his investment banker, whom he'd also fooled."

The man's offer on the mansion was eventually accepted, but each time the money was supposed to appear in the escrow account, he made some excuse. "He talked about being a diabetic and at one time he said he'd been in the hospital. Eventually, it came down to the closing day and the man signed all the papers at the title company, then disappeared. But the money never came through."

They believe their own lies

Eventually, the agent learned that the man was caught in a similar con job in Oakland and had a criminal record in Seattle for a variety of petty crimes.

When asked what the man might have gotten out of it, the agent seemed stumped. "I have no idea. He had been doing the same thing with other properties." Her only guess is that the con was an end in and of itself. "Sociopaths believe what they are saying - that's why they send out no warning signs."

"Why in God's name would people want to pretend to buy a multimillion-dollar home and burn their own time and run up their phone bills?" wonders Morgan Lane's McLaughlin. "It must be a weird fantasy for people."

"They suddenly have become important. They are being treated like they are a multimillionaire," Ahlberg of Hill & Co. theorizes. "They are getting driven around in the real estate agent's fancy car, getting wined and dined a bit."

But if touring open homes has become a national hobby, is it any wonder real estate has spawned its own pathological extremes? After all, the American dream looms large in the lives of average Americans. In the imaginations of certain disturbed individuals, it may take on monstrous proportions.

While real estate may be the ultimate expression of private property, for a brief moment, when homes are for sale, they're fair game for all our fantasies - no matter how crazy.