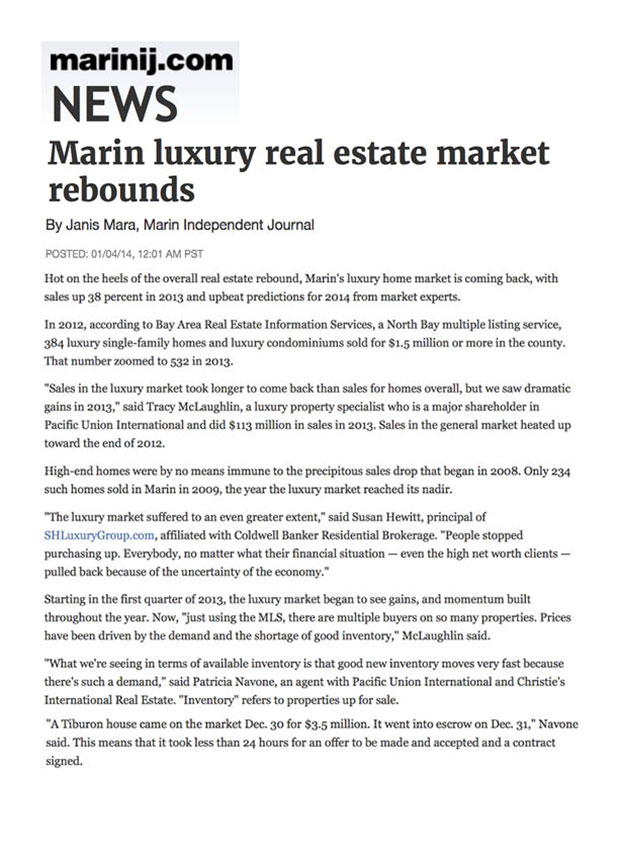 Hot on the heels of the overall real estate rebound, Marin's luxury home market is coming back, with sales up 38 percent in 2013 and upbeat predictions for 2014 from market experts.

In 2012, according to Bay Area Real Estate Information Services, a North Bay multiple listing service, 384 luxury single-family homes and luxury condominiums sold for $1.5 million or more in the county. That number zoomed to 532 in 2013.

"Sales in the luxury market took longer to come back than sales for homes overall, but we saw dramatic gains in 2013," said Tracy McLaughlin, a luxury property specialist who is a major shareholder in Pacific Union International and did $113 million in sales in 2013. Sales in the general market heated up toward the end of 2012.

High-end homes were by no means immune to the precipitous sales drop that began in 2008. Only 234 such homes sold in Marin in 2009, the year the luxury market reached its nadir.

"The luxury market suffered to an even greater extent," said Susan Hewitt, principal of SHLuxuryGroup.com, affiliated with Coldwell Banker Residential Brokerage. "People stopped purchasing up. Everybody, no matter what their financial situation — even the high net worth clients — pulled back because of the uncertainty of the economy."

Starting in the first quarter of 2013, the luxury market began to see gains, and momentum built throughout the year. Now, "just using the MLS, there are multiple buyers on so many properties. Prices have been driven by the demand and the shortage of good inventory," McLaughlin said.

"What we're seeing in terms of available inventory is that good new inventory moves very fast because there's such a demand," said Patricia Navone, an agent with Pacific Union International and Christie's International Real Estate. "Inventory" refers to properties up for sale.

"A Tiburon house came on the market Dec. 30 for $3.5 million. It went into escrow on Dec. 31," Navone said. This means that it took less than 24 hours for an offer to be made and accepted and a contract signed.

At the same time, McLaughlin said, "it's still a compartmentalized market," with the lower end of the luxury market seeing more recovery. "The price is still a very important determining factor."

"The recovery in the luxury market is very active at the lower end of the market, between $1.5 and $3 million," Hewitt agreed.

High-end buyers have become more finicky about what they purchase, just like those buying under $1.5 million, but for different reasons. For many lower-end buyers, a house has to be "turnkey," meaning that no repairs are needed. For these buyers, it's because credit is tight and it would be hard to get a loan to do the work, agents said.

"In this area, people always believed real estate would do nothing but increase (in value)," Hewitt said. "But after the recent downturn, people at all ends of the market are more cautious because this (the downturn) went on for five years. Before, you thought if you made a mistake, in three or four years you could turn around and sell it. But now they don't have that certainty," the agent said.

"With a discretionary market, the buyers are looking for things to be perfect," said Marti Grossman of Alain Pinel in Corte Madera. "At the lower end, they are so desperate to buy they are willing to overpay, whereas at the higher end they have the money to pay but they want value as well.

"They choose perfection. It's what they expect," Grossman said.

Just as with the overall market, the agents agreed there is a dearth of homes available for eager buyers.

"There's a lot of pent-up demand," Navone said. "I think some people sat on the sidelines for a while. They were watching, and then they started to see investors coming in at the low end of the market last year and the high-end people decided, 'Now's the time.'"

"The industry might suffer more this year from lack of supply than pricing issues," McLaughlin said.

The agents were upbeat in their predictions for 2014, though none believed the jaw-dropping 38 percent sales increase would hold steady.

"I think we'll see an increase in 2014. Now, how much is still up in the air but there's a lot of demand for those luxury properties," Grossman said.

"I think we have had our big lift, and so, with the proviso that we have the inventory, there will be an increase in 2014 over 2013, but probably not that dramatic of an increase," Navone said.