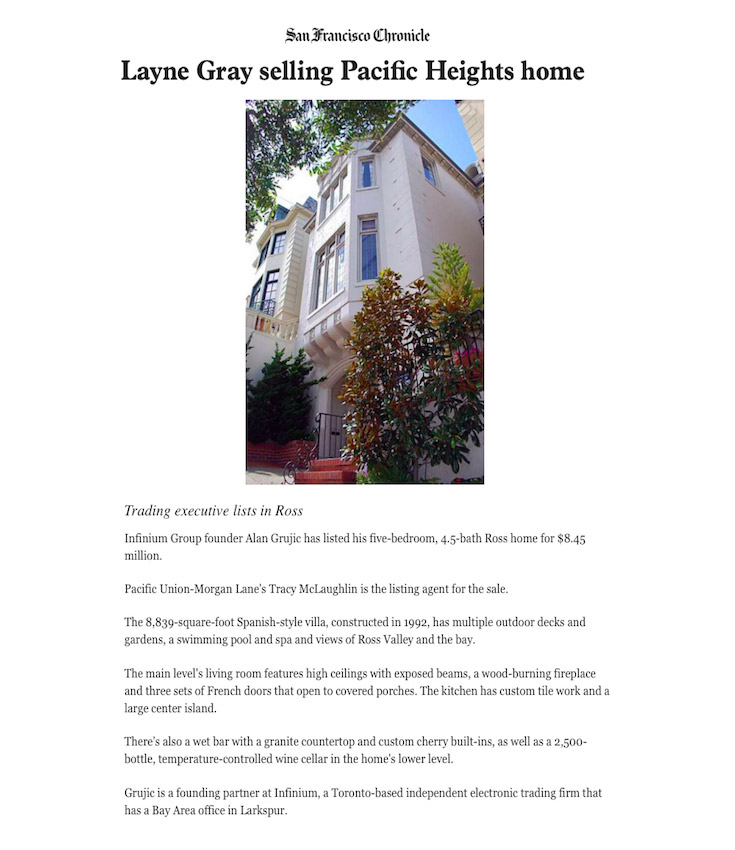 San Francisco entrepreneur and philanthropist Layne Gray has put a four-bedroom, 2.5-bath Pacific Heights home on the market for $5.995 million.

TRI Coldwell Banker's Carol Goldberg is the listing agent for the sale.

The home, which was built in 1930, has bay and Golden Gate views, as well as beamed ceilings, leaded glass windows and hardwood floors. The home's top floor has a family room with a fireplace, a game room and an office.

Gray is the founder and CEO of Vivanista, a San Francisco-based Web site aimed at "philanthropically minded women."

She's on the board of directors for the San Francisco Zoological Society.

Pacific Union-Morgan Lane's Tracy McLaughlin is the listing agent for the sale.

The 8,839-square-foot Spanish-style villa, constructed in 1992, has multiple outdoor decks and gardens, a swimming pool and spa and views of Ross Valley and the bay.

The main level's living room features high ceilings with exposed beams, a wood-burning fireplace and three sets of French doors that open to covered porches. The kitchen has custom tile work and a large center island.

There's also a wet bar with a granite countertop and custom cherry built-ins, as well as a 2,500-bottle, temperature-controlled wine cellar in the home's lower level.

Grujic is a founding partner at Infinium, a Toronto-based independent electronic trading firm that has a Bay Area office in Larkspur.

In May 2009, Grujic filed a lawsuit against the town of Ross, charging it improperly denied him permits to relocate the pool and build solar panels and a guest apartment on this property.