Fully Updated Arts and Crafts Mansion Outside of San Francisco 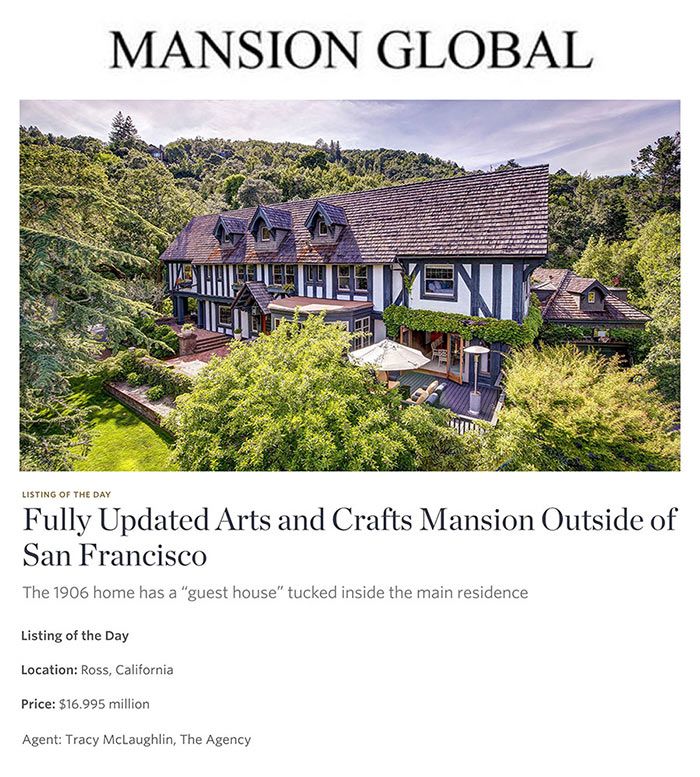 Listing of the Day

This Arts and Crafts masterpiece in the heart of well-to-do Ross, California, has recently been updated with a keen eye toward keeping all of the original details intact in a newly modern house.

Completed in 1906 by lead architect John White of the Bernard Maybeck firm, the house on Upper Road house underwent a major renovation in 2009 spearheaded by Bay Area architect Han Baldauf, a graduate of the Yale School of Architecture, founding principal of BCV Architecture, and past chairman of the Maybeck Foundation.

"It’s a blend of legacy architecture with a really beautiful but authentically done renovation," said listing agent Tracy McLaughlin. She estimated the cost of the project to be $7 million.

The owners "went to an architectural firm that really pays homage to that design and style," she said, describing the style of the house as "Arts and Crafts, with a Tudor feeling."

The grounds were designed by famed landscape architect Thomas Church, a pioneer of California modernism.

Interestingly, the house has a separate "guest house" on a different level that’s tucked within the main house.

"They created a bridge/breezeway that connects it with the rest of the house," Ms. McLaughlin said.

The heart of the home is a grand great room that opens directly to the two-acre grounds and outdoor entertaining areas. In addition to the large great room, there are two additional family rooms.

The 9,560-square-foot house has six bedrooms, four full bathrooms and three partial bathrooms. It sits on a two-acre lot.

Amenities include a circular pool with solar heating, an elevated stone spa, a pool house, four fireplaces (three wood-burning, one gas), outdoor built-in heaters for cool evenings, six-zone heat and air conditioning throughout, a fully fenced yard, a security system, mature trees and other plantings, a four-car garage with a sink and a flower potting area, and an enclosed outdoor kitchen with a large outdoor dining area.

"The more influential people in the community live there, on Upper Road," Ms. McLaughlin said.

The Marin County town of Ross has a very New England feel to it, she said. "It appeals to people from the East Coast—it has a town square and deciduous trees."

Many of the older homes in Ross were summer cottages for people from San Francisco, which is 15 to 17 minutes from Ross, Ms. McLaughin said.

The Upper Road house "is also on the way to some of our better recreational opportunities," she said. "It’s very outdoorsy around there."