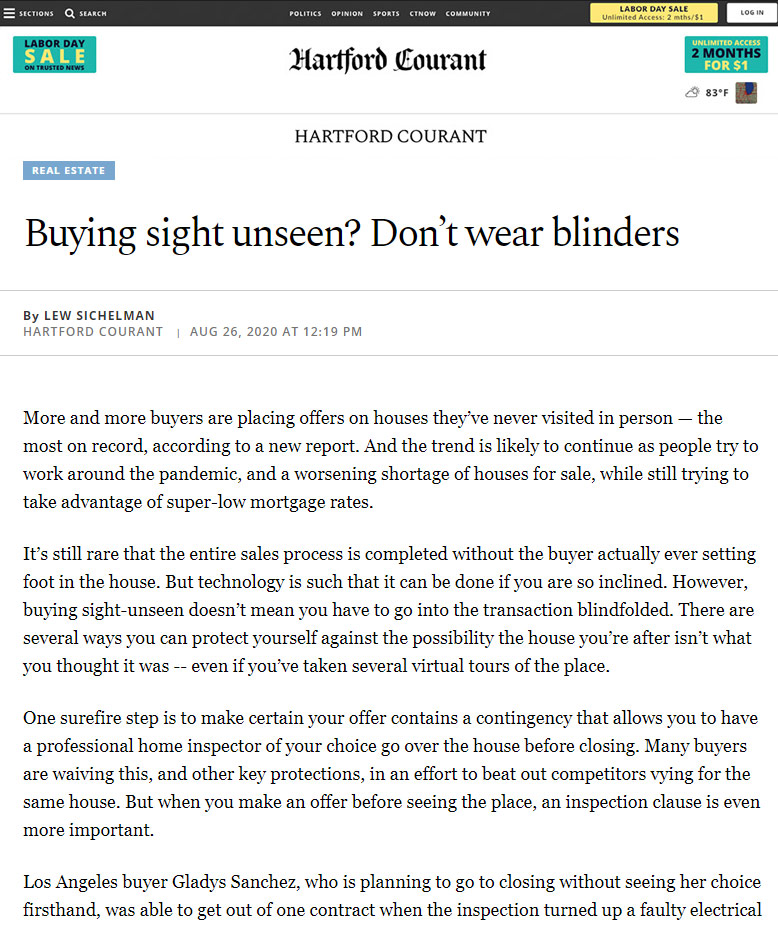 More and more buyers are placing offers on houses they’ve never visited in person — the most on record, according to a new report. And the trend is likely to continue as people try to work around the pandemic, and a worsening shortage of houses for sale, while still trying to take advantage of super-low mortgage rates.

It’s still rare that the entire sales process is completed without the buyer actually ever setting foot in the house. But technology is such that it can be done if you are so inclined. However, buying sight-unseen doesn’t mean you have to go into the transaction blindfolded. There are several ways you can protect yourself against the possibility the house you’re after isn’t what you thought it was -- even if you’ve taken several virtual tours of the place.

One surefire step is to make certain your offer contains a contingency that allows you to have a professional home inspector of your choice go over the house before closing. Many buyers are waiving this, and other key protections, in an effort to beat out competitors vying for the same house. But when you make an offer before seeing the place, an inspection clause is even more important.

Los Angeles buyer Gladys Sanchez, who is planning to go to closing without seeing her choice firsthand, was able to get out of one contract when the inspection turned up a faulty electrical panel. Sanchez considered the problem a deal-breaker, and the inspection contingency allowed her to call off the transaction.

Still, Sanchez — buying online because she lives with a sister who is immunocompromised — hasn’t given up on the process. “I never would have chosen to buy a house this way,” she told pollsters from Redfin. “But I’d rather take a risk with my home purchase than take a risk with my family’s health.”

New Yorker Brian Olasov also put in an offer on a house he had never viewed in person. He put a lot of faith in his wife, who had seen the place firsthand, as well as his local real estate agent and a trusted friend who took him on a Facetime tour. But in the end, he relied most heavily on his inspector.

I’m very, very prudent and conservative. The notion of buying a home sight-unseen is an anathema to me,” he said in a phone interview, adding that he hired the pickiest inspector he could find. “And because he was extremely busy, I paid twice his normal fee. But that’s still a very small cost when you’re looking at such a big purchase.”

As it was, Olasov received a 50-page report from his inspector, including a 1 1/2-page punch list of things needing attention. The seller agreed to repair every item.

Still, some sellers don’t like the idea of taking their homes off the market for a buyer who has never seen their places.

“If buyers are peeing their pants so badly that they have to sign a contract sight-unseen, they should shoulder the risk,” says Virginia broker David Rathgeber. “Why should the seller take his home off the market for a month or so when a buyer can suddenly decide, ‘Oh, I want to see it,’ goes to see it and cancels the contract?”

It’s also a good idea for buyers to check out the house’s neighborhood. You may not be able to go inside the house, but you can drive around the community to get a feel for where you hope to reside.

“I always, always, always show (clients) around the neighborhood,” says Redfin’s Lindsay Katz, who is Sanchez’s agent. She even goes so far as turning off any lights in her vehicle so they can see the house in the natural light, and opening the car windows to hear any street noise.

“If there are issues with the inside of a house, they can get those fixed, but they can’t fix a neighborhood,” Katz warns.

If you are moving from outside the area and cannot visit in person, use your local agent as your eyes, advises California agent Tracy McLaughlin, who has sold a number of homes sight-unseen over the years.

During the tour, says Danielle Parent, a Redfin agent in Cleveland, the agent should be pointing out things the camera misses, such as foundation cracks and the condition and age of the roof and windows. And the agent should advise you of the condition of surrounding houses so you will know if your neighbors take pride in ownership.

Orlando Redfin agent Juan Castro says he hasn’t seen many sight-unseen offers fall apart. But when they do, he said, it’s “usually because of the community or the location of the house.” For example, the place backs up to a highway or a shopping center.

In that regard, Parent says you can do a lot of homework from afar: Look at maps of the area, check out the local school system, locate grocery stores and other key amenities, order an environmental report to make sure there are no issues such as airplane noise, and study the history of appreciation for the house you want to buy, as well as similar nearby properties.