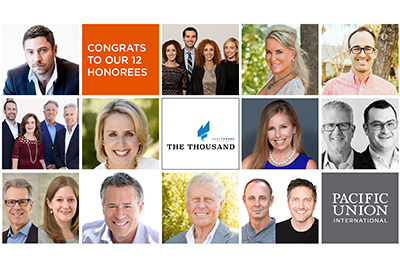 Twelve real estate professionals and teams at Pacific Union International have been ranked among the most productive in the United States, a testament to the firm’s commitment to recruiting and retaining California’s top real estate performers.

REAL Trends’ annual The Thousand list, compiled in partnership with The Wall Street Journal, ranks the top 250 real estate professionals and teams in the nation by 2017 sales volume. This year’s honorees, along with the rest of Pacific Union’s real estate professionals, strengthened the top independent California brokerage’s position as the fifth-largest residential real estate brokerage in the U.S. earlier this year, with 2017 sales volume of $14.1 billion.

“We are humbled by the extraordinary results of our top professionals,” Pacific Union CEO Mark A. McLaughlin says. “We honor their accomplishments and appreciate their continued commitment to our core values of teamwork, trust, and innovation. While we honor these amazing teams and individuals today, I believe our entire organization and our united culture throughout the San Francisco Bay Area and Los Angeles are our most significant assets.”

This year’s honorees are: